Vancouver Santa Claus Parade is coming to downtown this Dec 2!

The annual parade and food drive, which grows bigger each year, typically attracts around 300,000 spectators to downtown Vancouver for a full day of holiday festivities, including the signature parade that travels through the heart of the city.

The day kicks off at the Fairmont Hotel Vancouver for Breakfast with Santa. Lucky participants will have an opportunity to sit with Santa and confide their Christmas wish list before he presides over the festive parade at noon. Tickets are just $40 for adults and $20 for children.

From 10:00am, the Telus Christmas Square will be open for some pre-parade festivities in front of the Vancouver Art Gallery. Specific details haven’t been released yet, but you can expect family-friendly fun such as face painting, craft making and music.

The parade itself begins at 12pm sharp, winding its way through the downtown core. The full parade starts at the corner of Georgia and Broughton Streets, continuing east along Georgia Street before turning up Howe Street and finishing on Davie Street. 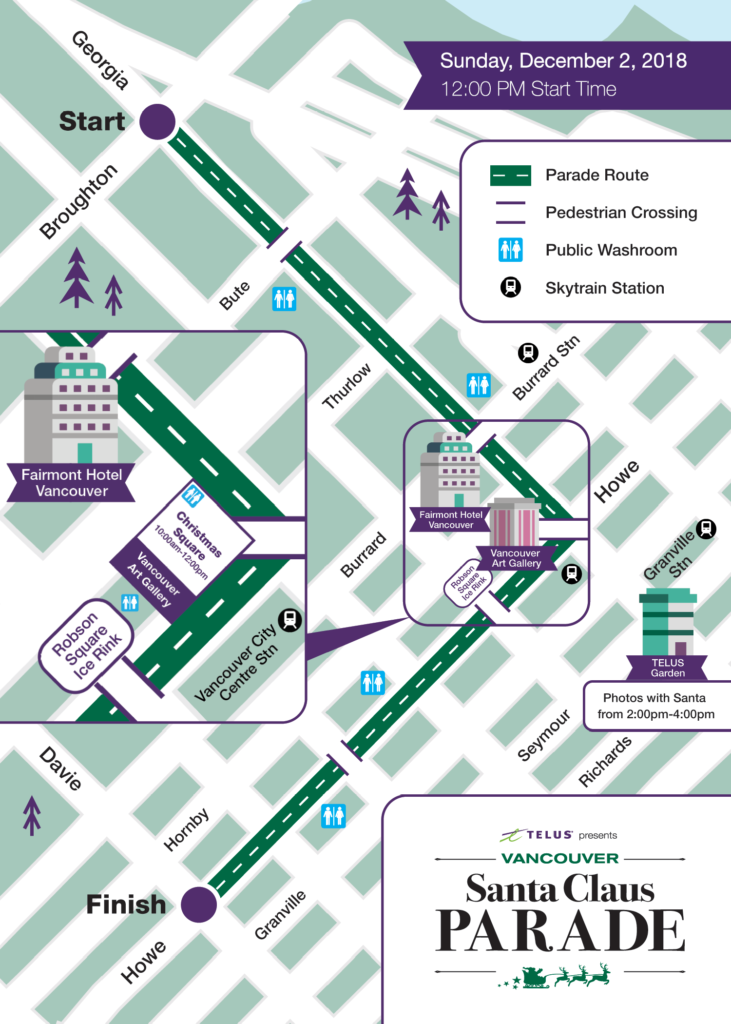 You can expect marching bands, dance troupes, festive floats and lots of community groups, all set to entertain the crowds gathering for the parade. Each year, about 60 community and corporate entries and floats, 2,700 marching participants and more than 300 volunteers converge on the streets of downtown Vancouver for this unforgettable event!

In-N-Out Burger is coming to Metro Vancouver for one day only this September!

5 Cozy Ways to Celebrate the Autumn Equinox in Vancouver

Where to celebrate Oktoberfest in Ontario

Things to do for Halloween 2019 in Toronto

Escape into a tropical holiday experience at the Bloedel Conservatory

How old is Canada after all?

Enjoy a picture-perfect gourmet picnic in a weatherproof globe on a beach in Vancouver!

A different kind of shower

Where to watch the Solar Eclipse

Vancouver’s Hot Chocolate Festival is Back with 100+ Flavours

The History behind Labour Day

10 Fall Things To Do in Vancouver

Free or Cheap Things to Do this Fall in Toronto

6 videos that’ll make you fall in love with Toronto

(Toronto) Guillermo del Toro: At Home with Monsters at AGO

Why is the Canadian Thanksgiving in October?

Haunted Places in Toronto and in Vancouver

(Vancouver) The Parade of Lost Souls 2017

Catch a movie with the (real) stars at the Twilight Drive-in Movie Theatre opening March 1!

Toronto is one of the most liveable city in the world

[TORONTO] Free (or Cheap) Things to Do Over the Holidays

Filming in Vancouver: Lost in Space, Cosmos, Monkey Beach, and the Detour

The Biggest Night Market In North America Is Opening In Vancouver!

[VANCOUVER] How to make the most of Christmas for free!

6 Autumn Activities to Get You Outside in Vancouver

[VANCOUVER] 18 places in Vancouver that are open on Christmas Day

Weekend in Toronto/Vancouver – May 31-June2

Proof that Toronto really is the Raccoon capital of the world

Waterfalls Near Vancouver You Need to Visit

Toronto Is Hosting A Huge Scandinavian Christmas Fair This Weekend

Where to Swim in a Lake Near Vancouver This Summer

Toronto is about to have a very Harry Potter Christmas